Here are some facts you probably didn't know about sea cucumbers: 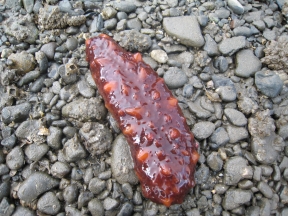 Step 1: Goopification Sea cucumbers, together with sea stars and sea urchins, are echinoderms. There are 900 known species of cucumber; the one pictured here is Parastichopus californicus, or the California Sea Cucumber. It's supposed to be nocturnal, but we found two cucumbers passing a nuit blanche on a low tide in February. When we found the first one, Dave, an oyster picker who's worked on the Hama Hama tideflats for over a decade, said it was the first cucumber he'd ever seen on the beach. So we felt really good about finding another one a couple hundred yards away from the first.
Sea cucumbers are very edible. The 5 longitudinal muscles in the cucumber are considered a delicacy. But they were over harvested a couple of decades ago in the Canal, and are only now making a comeback. So I'm not going to post any sea cucumber recipes. They eat passing plankton and plant and animal detritus off the sea floor, and are important ecologically.