The ratfish is a ridiculous creature. It has the body of a shark, the tail of a rat, the eyes of a lemur, and the face of a rabbit. We found a sorry looking specimen out on the tideflats a couple of nights ago. It was alive, but not at all lively. 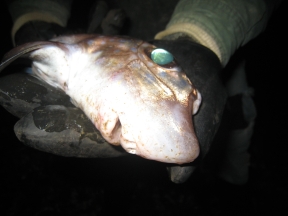 Ratfish don't have scales, live between 40 to 300 feet deep, and eat like an ancient dachshund: they use their teeth to mash up shrimp, worms, clams, and fish. This particular fish had a strange growth on its forehead. It looked like a little worm. We couldn't find anything about it on the internet. Any thoughts? 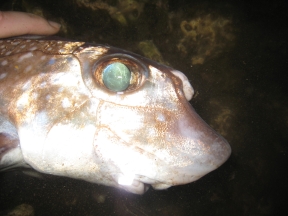 Because a Ratfish's body is supported by cartilage, it goes limp when removed from the water. But still, it was a little disturbing to see this fish looking so helpless. We found it lying on the oyster beds and put it into a slough still filled with water from the outgoing tide.

The next morning, after doing some research on the ratfish, we learned this from Wikipeia:

They also have a venomous spine located on the front of their dorsal fin.

the ratfish is able to inflict a mildly toxic wound.

So the next time we attempt to rescue a ratfish in distress, we won't use our bare hands! Ratfish, chin up. 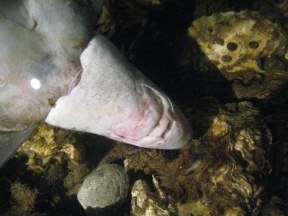