Both the weather and the sea cucumbers cooperated for last weekend's open farm day. About 20 people came to pick oysters, eat oysters, and explore the tideflats. The day involved lots of pointing and exclaiming over all sorts of creatures, including sea cucumbers: 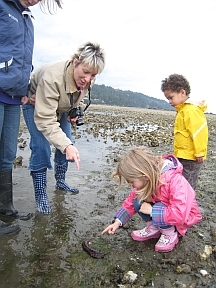 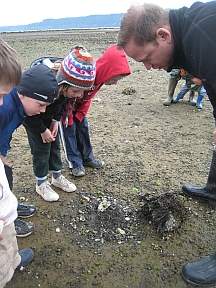 We grilled bacon-wrapped oysters (aka Angels on Horseback), barbecued oysters on the half shell with a garlic-butter sauce, and shucked icy cold Hama Hamas to eat raw. 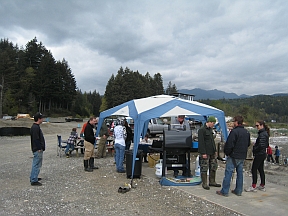 We're not sure if we'll do an Open Farm in May.... the Hood Canal Bridge is closing this Friday for six weeks and we're planning on having all hands on deck to deal with the predicted busy-ness (and hopefully, extra business). But we'll keep you posted!