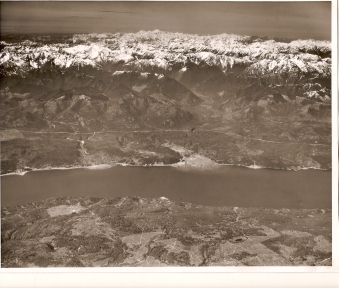 This is a scan of an old photo we have in the company office. No one is sure where it came from or who took it. The land in the foreground is the Kitsap Peninsula, the body of water is Hood Canal, and the Hamma Hamma River delta is in the center of the photo, with the Olympic Mountains behind it. There are powerlines running north to south (or left to right) across the photo in the lower section of the valley.
The Pacific Ocean is just on the other side of the Olympic Mountains. In the summertime you can hike across the mountains, moving from temperate rainforest to alpine meadow in one day's climb. Go to this neat National Park Service link for a history of how Native Americans used the mountains before Europeans came.
Eagle-eyed readers will notice that we spell our company with one m per Hama while the river is spelled with two ms. The Hama Hama Company was founded in the early 1920s, before the State had standardized the current spelling. Back then, the debate was whether the name of the river should be spelled Huma Huma or Hama Hama. (The river's name is the result of translating the native Twana language into English... word on the street is that the name was inspired by a skunk cabbage marsh that used to grow at the river's mouth and means something like "stinky stinky"). The company chose Hama Hama, but everybody else has since gone over to Hamma Hamma.
The question of how to pronounce the names of the river and the company has provided fodder for many a late-night campfire conversation. Unfortunately, none of us are sufficiently up on our grammer to have a definitive answer to the question, so we make our claims using examples from pop culture, and the whole endeavor quickly becomes silly.
The way it is: we say Hama Hama so that it rhymes with mama; Hamma Hamma sounds like ham. As in pig.
Share Share on Facebook Tweet Tweet on Twitter