...aka pickleweed, glasswort, salicornia, marsh samphire, sea asparagus. Sea beans, a crunchy, salty sea vegetable, thrive in estuaries up and down the Canal.  But even though they're ubiquitous, they're not part of the Lilliwaup food culture. Most people around here don't even know the plant is edible. A field of sea beans on the HH delta: 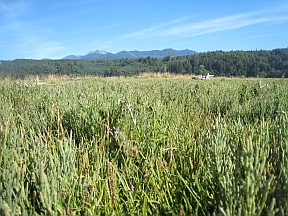 These pictures were taken a few days ago, and the beans are already in bloom. They're best when young and tender, in late May and June. You can eat them raw, fried, steamed, or pickled. We prefer them pickled, but also add them to stir fry and salads. People from Alaska seem to be more familiar with the plant, which they normally call pickleweed. Even though they're not making waves in Lilliwaup, sea beans are showing up in farmer's markets and fancy foodie restaurants in New York, Seattle and San Francisco, where they command scandalous prices. Check out this chowhound article for recipes and resources.