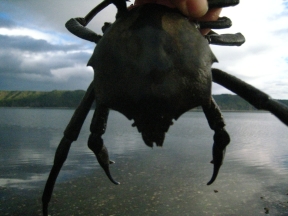 Spider crab, shown above, are like Daddy Long Legs... they have a really scary outline, but relatively inefficient pinchers. They might make a mark, but they won't take off your finger.
Dungeness crab, on the other hand, are super dangerous and more aggressive than a rabid wiener dog. But they're no match for Jim. Here are some pictures of Jim picking a Dungeness crab up out of a slough: 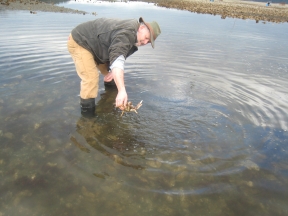 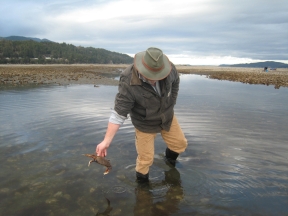 The crab season in the Canal is open only fitfully and mainly to recreational crabbers. Occasionally the Skokomish Tribe will have a commercial crab opening, but for the most part we buy crab from Westport, on the ocean, or Sequim (pronounced skwim), north of us on the Peninsula, to sell in our retail store.
Dungeness crab bites bleed like crazy. We recommend either being an expert crab handler or using tongs to handle the animals. 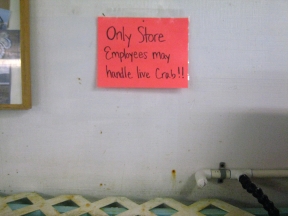 We put this sign up after a customer got pinched pretty badly while trying to help himself to the crab. In a bit of irony nearly overlooked in the bloody scuffle following the bite: the customer had announced his intention to pick out his own crab by saying, rather gruffly, "I've been handling Dungeness my whole life, missy."
Share Share on Facebook Tweet Tweet on Twitter