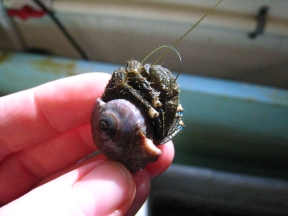 This lovely creature is a Hairy Hermit (Pagurus hirsutiusculus)--a species easily identified by the white bands around its walking legs (which you can clearly see in the middle photo). It came in on the oyster barge and was put back out on the beach after the photo shoot. 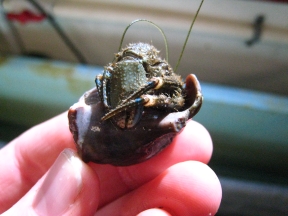 Hairy Hermits are the most common hermit crabs in Puget Sound. Like all hermit crabs, they make their home in abandoned snail shells. A hermit crab's asymmetrical, unprotected abdomen fits easily into spiral snail shells. Hermit crabs won't kill a snail in order to take its shell, but a larger hermit crab may evict a smaller crab and steal its home. The huge right claw is used for protection and gathering food; the smaller left claw is used for eating. Male hermit crabs also sometimes use their left claw to drag females around. (Not sure how a male crab eats during this time, maybe the female feeds him. Anyone?). The male crab will guard the female with his big, he-man right claw until she molts (or sheds her exoskeleton in order to grow bigger), at which point he can fertilize her eggs. 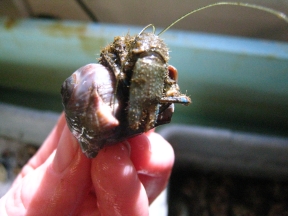 Hermit crabs can make noise! Listen to this audio file from hermit-crabs.com to hear "Ecuadorian crabs Pablo Ting and Jesus having a rather heated discussion." Hermit Crabs, like crickets, make this noise by rubbing two appendages together, a process called stridulation. While scientists aren't sure exactly how the crabs make the noise, it does seem to be a sound made in response to stress or irritation.

Also visit today's Word of the Day, inspired by the Hairy Hermit Crab.