Long Live the Kings, a non-profit group working to restore native salmon populations, has just completed a 12-year steelhead restoration program on the Hamma Hamma River. The project has gotten great coverage from the Kitsap Sun, check it out here. The really exciting thing about LLTK is that they've developed and implemented a hatchery system that preserves the genetic diversity of the wild fish populations. They take a small number of eggs out of the redds (or nests) produced by native, wild fish, then hatch the eggs in a hatchery and raise the fish for 4 to 5 years before putting them back in the river to spawn. This increases the number of fish that spawn in the river without introducing non-native fish into the ecosystem. When the LLTK program started, there were only 10 steelhead redds in the Hamma Hamma. Since then, the number of redds has increased to 104. Rick Endicott, fisherperson extraordinaire for LLTK, estimates that between 30 and 80 of these were produced by wild fish. Puget Sound steelhead were listed as threatened under the Endangered Species Act last year. Last Friday, LLTK released the last batch of hatchery-raised steelhead into the Hamma Hamma. Now the group is going to monitor the river and see how the steelhead population does without any human intervention. They're also working on replicating the Hamma Hamma project on other rivers in the Hood Canal watershed. 28 of the adult fish released into the HH have acoustic transmitting devices implanted just below their dorsal fin. These devices will help researches keep track of where the fish go and how long they live. We're not sure exactly what sound an acoustic transmitter makes when it gets munched by a seal, but we'll keep you posted 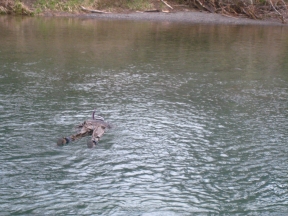 That's no steelhead. It's Joy Waltermire of Long Live the Kings with a snorkel, a dry suit, and an underwater video camera. You can find her video at the Kitsap Sun link above.