A red algal bloom started last week near Hoodsport, and slowly worked its way north. Today it hit the beaches at Hama Hama. 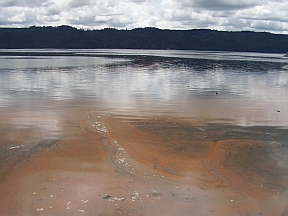 Ever since the bloom started we've been getting calls from people concerned about red tide. The water is indeed red, and especially so when all the algae concentrates in still water on an incoming tide, as above. But it's not the scary "red tide" -- this algae doesn't hurt shellfish or the people who eat them. And it's not necessarily a harmful algal bloom (or HAB, the term that's replacing 'red tide' in the scientific parlance), although this big a bloom could potentially cause a dissolved oxygen problem, which would suck for the Canal's fish populations. According to the Washington State Department of Health, this red algae goes by the delightful name of sea sparkle, or noctiluca. This site calls sea sparkle a "marvel" of the ocean, and explains that noctiluca is a red-colored dinoflagellate that uses a "gas bag" to float on the surface on the ocean. Noctilucales can also cause bioluminescense. If you've ever swam in the Canal (or in any body of salt water) at night  then you've probably seen bioluminescense. It's normally a summer time thing (both the critters and the swimmers prefer warm water) but a couple of winters ago, while out digging clams at midnight, we noticed that if you stomp your feet on the tideflats the sand around your feet will light up with bioluminescence. It's pretty cool. Folks here in Lilliwaup refer to bioluminescense as phosphoresence, and that's incorrect. But then again: most of us still call trilliums Easter lilys.