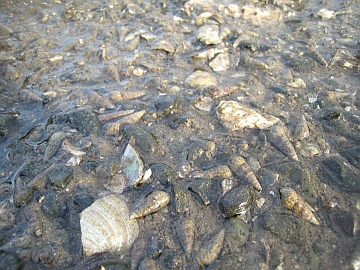 There used to be only a few of these little critters on the beach, now there are thousands. They're very, very sociable, and like to congregate on muddy sections of beach. We didn't know what to call them, but someone came up with the term algae eaters, and it stuck. Unicorn horn shell was in the running but deemed too fanciful. Their real name is Battlearia attramentaria, or Asian mud snail. They are originally from Asia (surprise!) and are normally associated with oyster farms... probably because they piggybacked in on the Pacific oyster when farmers first began importing seed from Japan. To be really specific, they eat diatoms. And although 'diatom eaters' sounds really cool, it's a bit of a tongue twister.