Oysters are legendary aphrodisiacs, and Casanova reportedly began each day with  a couple dozen raw ones. Now, we would just write these statements off as old wives' tales propagated by oyster farmers around Valentine's Day, except that scientists have proven us wrong. It turns out that that raw oysters actually do stimulate the release of certain sexy hormones. And of course, eating them with champagne doesn't hurt much, either. If you're on the hunt for some oysters this Valentine's Day, you can always buy some from us (!) or you can hit up one of the many champagne and oyster dinners happening around the country.  Here's one in California (and not, as we first proposed, Miami) and a whole slew of them in New York City, which should not be confused with a whole slough of oysters, which isn't very fancy at all: 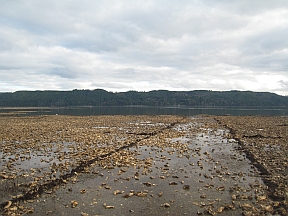