Another mystery from the deep. This one came in on a tub that had been soaking for several weeks at a negative tide level. It was purple and wide eyed, and it could suction itself to the bottom of a bucket like it wanted to stay there. We took pictures of its head. It had horns: 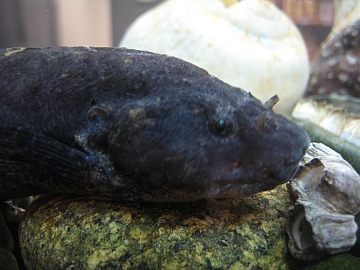 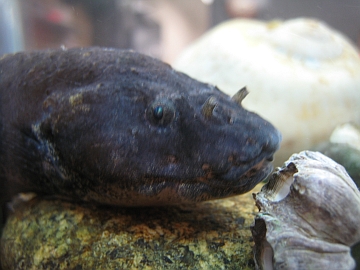 We had absolutely no idea what kind of fish it was, and Oyster Fan made the now-infamous and very whimsical suggestion that it might be a baby seal. But really I just said it looked like a baby seal, as in "of course this is really a fish, but isn't its head funny looking?" The purple creature was clearly very unhappy during its brief stay in the aquarium, huffing and scampering about like a lost puppy. So we let it go. Here it is, swimming to deep water: 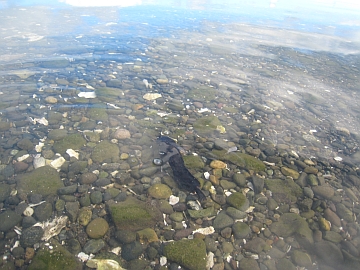 To identify the critter we enlisted the help of Keith from the really cool site Emerald Diving.com. Here's his response:

Cool find, indeed.  It looks like snailfish. Snailfish have modified pelvic fins that form a sucker and allow the fish to hold fast to solid objects, as you described.  They also will also often double over and wrap their tail around to the their head on occasion – kind of like they are curling up into a ball.  The “horns” are actually its nostrils.  It is hard to tell the species from the photo,  but if I had to guess, I’d say it is a Ribbon Snailfish (Liparis cyclopsus) – a rare find indeed!!!

And here's a photo of a showy snailfish from Keith's fish portfolio: