This year the Pacific Coast Shellfish Growers Association's annual conference is in Lake Chelan, an area of Eastern Washington which purportedly looks something like this: 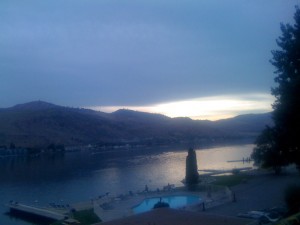 But, from what we can tell, really looks more like this: 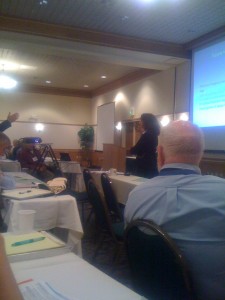 (apologies for the cell phone pictures). The conference started out with a bang on Wednesday morning with a talk about ocean acidification by Dr. Richard Feely of NOAA and the University of Washington. Here's a brief, and dirty, description of the problem: Scientists have long known that the ocean absorbs carbon dioxide... and for a while they thought that was a good thing because it removed co2 from the atmosphere. But now they know that the extra co2 is actually making the oceans more acidic. As that happens, we can expect most sea plants (which use co2) to flourish, and creatures like snails, coral, oysters, and plankton to suffer. And guess what? Off the Washington and Oregon coasts scientists are already seeing pH levels low enough to prevent sea creatures from forming shells. If you're feeling motivated to help save the defenseless copepods, you could write to your Senator and tell him/her to support the FOARAM Act, Senate Bill 1581, which would create an agency within NOAA specifically devoted to oceanic acidification research. The act passed the House but has been swimming around the Senate since 2007, hopefully without dissolving. 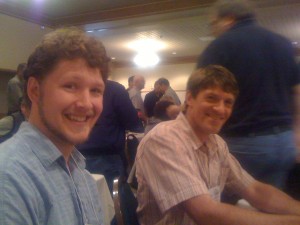 Above: Leif Rasmuson, a shellfish biologist with the Skokomish Tribe, and Adam, looking altogether too happy after the ocean acidification talk. Then today, hatchery managers from Oregon's Whiskey Creek oyster hatchery talked about their difficulties keeping oyster larvae alive. While the bacteria Vibrio tubiashii normally gets most of the credit for killing oyster larvae, managers at Whiskey Creek think the issue is more complicated, and that low pH in the ocean water is also a factor. Oyster larvae have softer shells than full-grown oysters, and are more susceptible to changes in pH. And yes, this is depressing. But never fear: lots of ridiculously fun things also happened at the conference, however, to protect the innocent, we'll keep them to ourselves.