Oysters are hardcore about sticking together. When clusters come in off the beach we try to break them apart into singles, but it's generally impossible to do so without damaging the oysters. Now scientists at Purdue University have figured out exactly why that is: the oysters are cemented together. Oyster shell typically contains 1 to 2 % protein, and oyster adhesive (or what they use to attach themselves to each other) contains 5 times that amount. But as explained in this NY Times article :

oysters seem to use far less protein in their adhesive than other marine animals do. Mussels and barnacles produce a softer glue with more protein, while oysters produce a harder cementlike material. 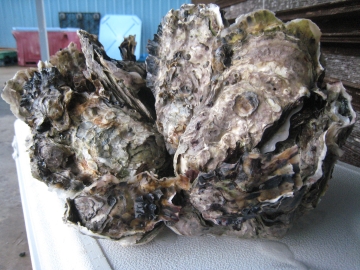 For centuries people have used oyster shell to make concrete, so it's fitting that shells contain a cementlike substance. (Concrete = cement plus an aggregate like sand or gravel). Oyster shell concrete, called tabby, is made of oyster shell, lime (which you can extract from burned oyster shell) and sand. Depending on whom you ask, tabby was either developed in Morroco, then spread to Spain during the Moor conquest, and then introduced to the Americas with the conquistadors... or it was used in the New World before Europeans arrived (although none of these structures have ever been found)... or it was developed by the British. Either way, the U.S. Atlantic coast is the world's epicenter of oyster shell tabby construction. Early colonists used oyster shell mined from Native American middens to build forts, chimneys, and even vats to dye indigo. Someday, hopefully sooner rather than later, we're going to construct something out of tabby. Maybe a fence. Maybe a wall. Maybe a tower. Maybe an outdoor chimney. Maybe just a giant tchotchke. Stay tuned. Read how to make tabby. Read more about tabby's history on the east coast.