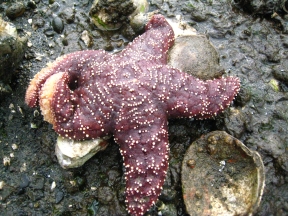 Sea stars, the echinoderms formerly known as starfish, have neither brains nor blood. Their circulatory system uses filtered sea water, and their central nervous system is spread out among the rays, or legs, which scientists believe communicate sensory information to each other whenever the starfish... whoops, sea star, decides to move or eat. Severed sea star rays normally grow back, and a tropical species known as Linckia can regenerate an entire sea star from a single ray. Some sea stars, like the one above, are predators that feed on mussels, clams, and oysters. The stars first pry the bivalves open, and then evert their stomach into the opened shell to digest the meat. Naturally, sea stars aren't as popular with oyster farmers as they are with 6-year old beach combers. Tube feet, above, are part of a sea star's water vascular system. The star contracts a muscle to force water into the tube foot, causing the foot to expand and push against the ground. When the sea star relaxes the muscle, the water flows out of the tube foot and the foot retracts. Each foot ends in a tiny, and extraordinarily sticky, suction cup. We hope that sea stars are able to turn the stickiness on and off, otherwise this guy is going to be lugging these rocks around for quite a while. 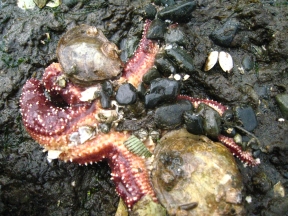 Sea stars have bony, calcified skin, which makes them unappetizing to humans and most other animals. Most sea stars have five rays, but some have 10 or 20 rays. 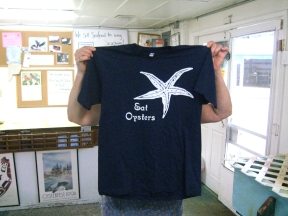 Now you get the joke, too!