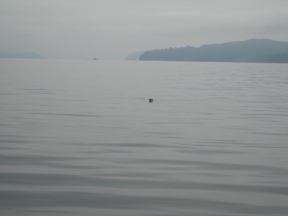 Hood Canal, circa 2008. The near dot in the picture is a seal, the far dot is a boat.
In the mid 1800s, before Washington was a state, civic minded leaders in the territory decided that they needed to do something to distinguish their homeland and themselves. People on the East Coast still thought of the Washington residents as wild, wooley and completely uncivilized. One astute resident of Union City, Washington, a Mr. Samuel Hood, who'd made a fortune in the shipping industry, took a vacation to New York in 1852 and noticed the considerable fanfare and wealth generated by the Erie Canal, which had been completed in the 1820s. The Canal had been immortalized in song, in poetry, and in the prose of Herman Melville, who, in the chapter of his masterpiece Moby-Dick called "The Town-Ho's Story" depicts the Erie Canal as a symbol of the industry, hope, and debauchery of the young American nation. Hood decided that the best way to ensure statehood for his beloved territory would be to construct a waterway that surpassed the Erie Canal in terms of scope, ambition, and epic-ness. He devised a plan to dig a canal that would connect Discovery Bay to Oakland Bay, and speed up the delivery of cargo from abroad to the inland seaports of Tacoma and Shelton. Construction of Hood's Canal began in the fall of 1854. Hood hired teams of ox-loggers to haul away the gravel and rock that his digging crews excavated with dynamite, picks, and shovels. The gravel was piled to the east of the Canal, forming the meager hills now found on the Kitsap Peninsula. Work on the Canal continued until the spring of 1861, when, with the Canal unfinished, Hood's finances depleted, and Washington still a territory, the last of the digging crews hung up their shovels. Two years later a group of investors from the town of Belfair continued excavation of the Canal. But instead of completing Hood's design, the investors turned the Canal to the north, so that it provided saltwater shipping access to the previously landlocked town of Belfair. Over time, animals and aquatic plants native to Puget Sound moved in to colonize the newly created Canal. But unfortunately, when Washington finally became a State, in 1889, Hood's Canal wasn't even mentioned. 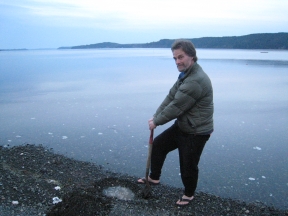