Wednesday, June 4th was the lowest tide of the year. The tide dropped to -4.3 around noon, and then rose to a 12.3 high tide in the evening. A group of people from the Seattle Oceanaire restaurant came out to celebrate the low tide and learn a little bit about Hama Hama oysters.

Adam gave them a walking tour of the beach, going over everything from oyster seasonality and reproduction to the challenges of predicting the effect of atmospheric pressure on tidal changes. They gobbled it up, and they also ate an impressive quantity of shellfish. All in the name of research, of course. 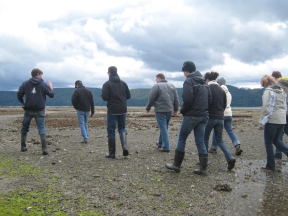 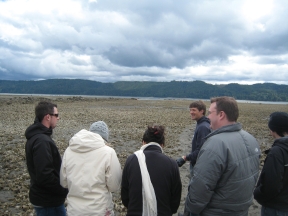 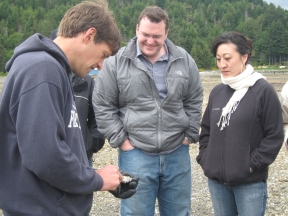 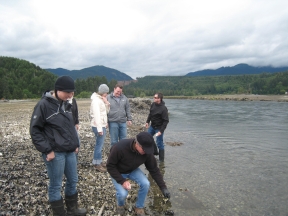 Adam also discussed how growing location influences oyster flavor. Here, Jeff Daniels from Marinelli Shellfish reaches for an oyster growing right next to the river, which tend to be sweeter, and less salty, than oysters grown further from the river. 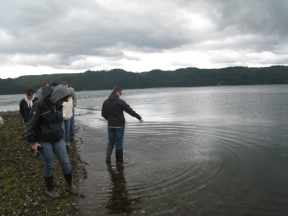 One of the coolest things about an extreme low tide is that you can walk all the way out to the tippy-tip end of the tideflats, to where the ground starts sloping down to the bottom of the Canal. It reminds you of how hard the river has worked to build the massive tideflats.

Unfortunately, the drop-off is really hard to photograph. Above: a picture of people looking at it.