Olympia oysters are the only oyster species native to the west coast of North America. They're small and intense, with a surprisingly coppery flavor.

Olympias were an important food source for Native Americans, and a big hit with everybody who came later. Commercial harvest of wild Olympia oysters peaked in Puget Sound in the late 1890s, when schooners full of oysters were shipped down to San Francisco to feed the hungry (and flush) gold miners. But by the 1920s, the Sound's Olympia oyster population began to decline due to a combination of pollution and overharvesting.

The bigger, heartier, and meatier Pacific oyster, introduced from Japan in the 1950s, has since taken over as the dominant oyster in Puget Sound.

Olympias make even an extra-small Pacific look like a giant: 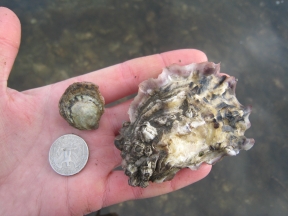 Not that the two species can't coexist. Here's a photo of Olympia oysters piggy-backing on a cluster of Pacific oysters: 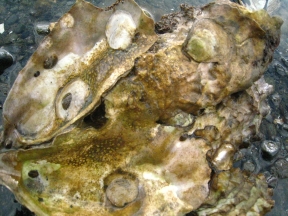 Lots of good people are working hard to restore the Olympias to their native abundance, including The Nature Conservancy and the Puget Sound Restoration Fund.