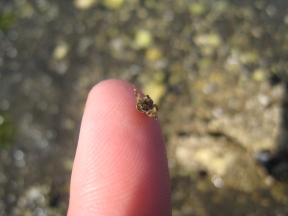 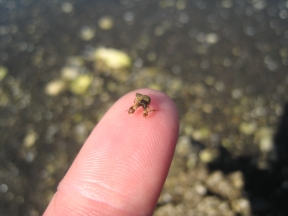 The tideflats are full of life... much of it too small to notice. This little guy had lots of personality but didn't photograph well. Even in person it was hard to tell what was going on. How many legs does it have? Or are those antennae? Could it be a molted hermit crab? The flatfish below is also hard to see, but only because it's got some excellent camouflage. There are lots of juvenile starry flounders living in sloughs on the flats. 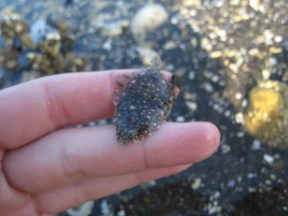 Like all flounders, these fish start out as symmetrical larvae, but as they develop one eye migrates across to the opposite side of the body. The result is a very confused looking fish. Scientists say that a flounder's orientation (whether it's lefteyed or righteyed) varies with geographic location... according to this study, righteyed and lefteyed flounder occur in equal proportions in San Fransisco, but lefteyed founder become more numerous in the North Pacific and Asia. In Japan, starry flounder are 100% lefteyed. We didn't pay close enough attention to this fish to notice whether it was lefteyed or righteyed. Stay tuned for more posts featuring starry flounders.