The Hama Hama bridges were built in the 30s, and they're beautiful and artistic and much preferable to the bland concrete spans the State will eventually replace them with.  The problem is that they were built for 1930s-era cars, and now they're too narrow. This fall, the Washington State Highway Department compounded that problem by putting guard rails on the bridges. Here's the south bridge pre-guard rail: 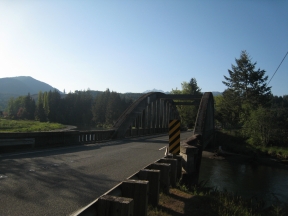 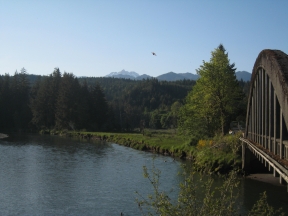 It's not immediately clear why these bridges needed guard rails. Obviously, no vehicle was going to drive off them mid-span. We posed this question to the construction workers, who told us they were putting guard rails on the bridges "because the bridges don't have guard rails."

Below: the south bridge with rails. 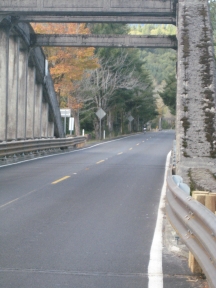 But the really terrible thing is that now there is absolutely no place for pedestrians to jump to safety. When the guard rails weren't there, pedestrians could escape the traffic by stepping between the columns. We're particularly concerned about Coco, our 82-year old neighbor from Belgium, who walks along the highway every day. Walking across the bridges was dangerous enough before, but it's downright deadly now. Before, when she got trapped on the bridges by traffic, she could cling to the pillars in relative safety. Now she'd have to jump the guard rail first. Coco thinks that the State should put pedestrian walkways on the outside of the bridges, but the State says, "non." We suggested maybe she doesn't try to walk across the bridge anymore, which didn't go over well. Here she is, in her own words:

(Bonus: by watching the video, you also get to learn about our new clam chowder!)