One Saturday a few weekends ago at least ten customers came into the seafood store asking for mussels. And that got us thinking: why don't we sell mussels? There are plenty out on the beach. So last Friday Nathan and Miguelito spent two minutes collecting about 75 pounds of mussels, and then about two hours processing them (removing rocks, separating them from one another, etc). We sold them over the weekend in the retail store. To be more precise: we had them for sale over the weekend in the retail store. We didn't sell much of anything because a freak blizzard blew through town, knocked the power out, and cramped everyone's style. 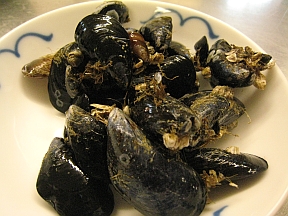 These are native blue mussels, Mytilus edulis. They're wild, and they look like it. And they really like to cuddle with one another. After just one day in our live tanks they'd reconnected into a solid, mussel-y mass. That's the coolest thing about mussels: they have byssal threads (also called beards) that they can use to move themselves very short distances. They throw the thread out, then contract their byssel muscle to pull themselves that direction. (They still couldn't hold a candle to a clam in a foot race, though.) The Mediterranean mussel was introduced into Puget Sound in the 1700s in ballast waters and again later by commercial shellfish farmers.  Blue mussels are smaller and don't live as long as the Mediterraneans, but the two species can interbreed. 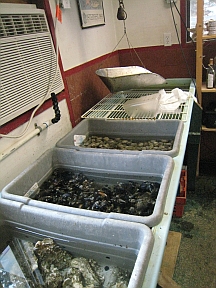 Oysters, mussels, and steamer clams. We steamed mussels on Saturday night in some dry white wine and melted butter. They were amazing.