As mentioned in the last post, moon snails enjoy snacking on native butter clams. Tangent: humans also enjoy snacking on butter clams... they make amazing chowder, fritters, and clam strips. Grandpa Bart likes them sliced in half and deep fried in the shell. But because butter clams require more work than the simple-to-cook and delicious Manila steamer clams, they don't sell well in the retail store. But if you want to try butter clams yourself, let us know and we'll dig some for you! But for moon snails, butter clams make more sense, because they're bigger and meatier than Manilas. 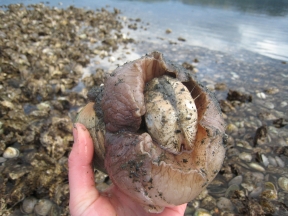 Death by moon snail doesn't look or sound like much fun. The moon snail feeds by first softening its victim's shell with a secreted chemical and then drilling away at the softened shell with its sand-paper like tongue, called a radula. Once the hole is complete, it sucks out the meat of the clam using the tongue. The dual-function tongue is also referred to as a 'mouth part.' This clam just barely escaped with its shell intact. 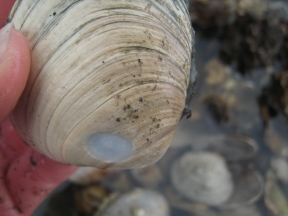 This one wasn't so lucky. 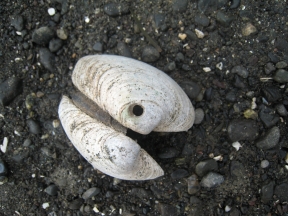 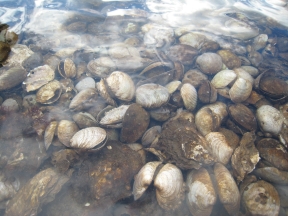