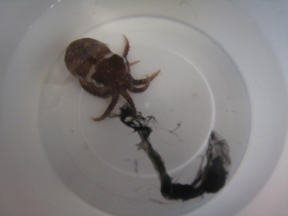 This little darling divided the Hama Hama crew into two camps: those who thought it was a squid, and those who thought it was a juvenile octopus. In truth, it's neither. Stubby squid aren't true squid, have a lot in common with octopuses,  and are most closely related to cuttlefish. Like octopodes, they can change color and release ink when threatened. (Go here for photos of stubby squid in various hues). Unlike jet-propelled octopi, stubby squid propel themselves with little wings and normally bury themselves in the sediment instead of swimming around in the water column. Stubby squid eat small live shrimp and live in the lower intertidal region down to 300 meters. They're diminutive and super cute. The one pictured above was about an inch and  a half long all balled up. Like the octopus a couple of weeks ago, he was hiding in an oyster tub that we brought to shore with the barge. Bright note: stubby squid are found in surprisingly dense populations in polluted harbors outside major cities like Tacoma and Seattle. Actually, we're not entirely sure this is a bright note. But at least something can live in those harbors, right? We took this video of the stubby squid before returning him to the Canal.

Here's a much, much better photo of a stubby squid: