We just about got skunked last weekend during the first recreational shrimp opening of the year.  Normally we shrimp at about 150 to 200 feet, and normally we do really well. There were 10 of us shrimping in the same area this year, but at 11 am, when we pulled our first pull, not a single one of us had caught a single shrimp. Zero. Zip. We panicked, and moved the pots as deep as our rope allowed, but when it was all over only one of us had limited. Another couple caught 20 to 30 shrimp each, one person pulled up a pot with only 1 shrimp in it, and two people lost pots altogether after dropping them too deep. 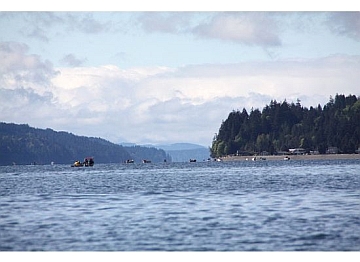 Question: Did other people notice that the shrimp were deeper this year than last? Any ideas why? One idea we had is that maybe there's more oxygen in the Canal this year, so the shrimp aren't crowding into the shallow areas. For those of you who haven't ever taken the opportunity to catch your own shrimp in Hood Canal, here's a brief recap of how the recreational season works: you can have pots in the water from 9 to 1 pm. Shrimp season opens the first Saturday in May and continues the following Wednesday, the second Saturday, and then the second Wednesday. It's a four day season, so there's lots of pressure to catch your limit of 80 shrimp per person per day. For more info on regulations visit the WDFW  page here. 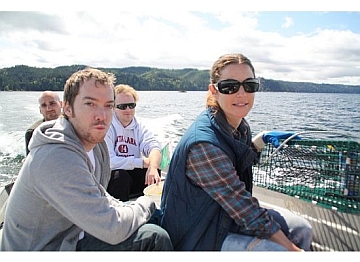 No shrimp, no smile