This little guy came in with the spot prawns last week. He lost his right paw somewhere along the way. 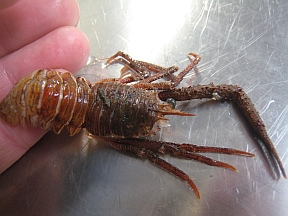 After a little sleuthing we determined that he's a squat lobster:

According to Emerald Diving, squat lobsters are actually just funny looking shrimp, and they're common in Hood Canal. Wikipedia says that referring to squat lobsters as lobster "highly upsets the Maine lobster industry." So from now on we'll refer to them as squat "lobster." And it turns out that there are actually several kinds of shrimp that live in Puget Sound. For obvious reasons we're partial to the spot prawns, but the candy stripe shrimp gets the prize for coolest looking:

Go here for an illustrated list of Puget Sound shrimp.