Whose idea was it to designate August 5th National Oyster Day? Is there an Australian prankster embedded in the Bureau of Obscure Food Holidays who's sabotaging our ability to truly celebrate our nation's most valuable bivalve? If you haven't already heard: August is an iffy month to consume raw oysters. They might make you sick, and they might be spawny.  But maybe August is a fantastic time to be an oyster? The water's warm, the sun's out, you and all your friends and neighbors are spawning, and there's less risk that you'll be harvested and eaten. Tomorrow we'll be celebrating National Oyster Day by doing what we always do this time of year: frantically trying to recruit as much oyster larvae to our beach as possible. The beach crew spent the morning bagging oyster shell. Later, during the oyster spawn, we'll put the bags out on the beach to collect oyster spat in hopes of getting a good oyster set. Spawn, spat, set. Read more about it here. 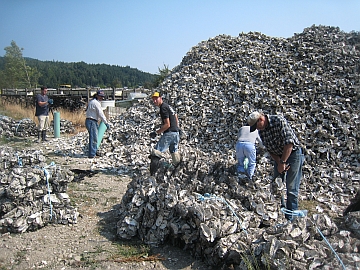