The fringe, or bill, is the most colorful part of the oyster shell. Sometimes the bill is dark, sometimes it's very light: 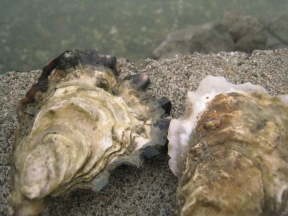 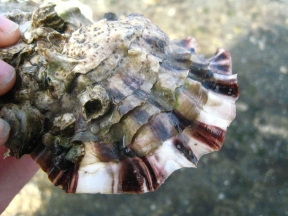 This analysis of oyster cultivation in Korea claims that an oyster's shell color, along with its growth rate and spawning season, is determined by growing location. According to this study, oysters grown in the most favorable conditions grow fastest, get biggest, spawn latest, and develop light gray shells. We think the color differences are genetic as well as environmental. The oysters in the middle picture above are very different in color, and yet were harvested from the same spot and are the same size, age, and shape. Occasionally we see oysters with extraordinarily fluted shells, which is also something we attribute to genetics: 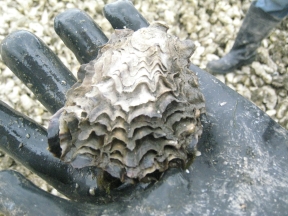 One possible explanation: We're not sure if there are billions of oysters in Hood Canal, or only hundreds of millions. Either way, the genetic diversity of the Canal's wild oyster population is off the charts.